By webfact,
June 26 in Thailand News 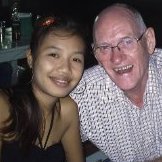 The baht is extremely overvalued

Fears for the baht as it hits a 15-year low   Really ? The £/baht was higher than currently last week ! Talk about a nonsense headline